Note: Stockist Cases are now sold in denominations of 6 or 12. We are no longer carrying Stockist single units.

A classic, water-soluble pomade with an aggressive hold and a handsome aroma. Suitable for all hair types to create a smooth polished look that would make your grandfather proud.

Rinses completely clean from the hair without shampoo.

For smoothest results, apply a fingerful to towel-dried hair and comb it into the desired style.

Pomade smells so good, I'd love it even if the results were abominal - but, if used properly, there isn't a hair product on the market that does what Pomade does. Most Pomades are white and fairly heavy. They eventually dry (if they're water based) and hair tends to contract and begin to wave or kink. Pomades can also feel a bit too insulating and in the summertime, that can be an issue as well. Most pomades will also leave varying degrees of shine to hair, but they will flatten out and separation suffers when that happens. Enter Victory Pomade - the violet, sparkly, sticking feeling stuff. When I first tried Pomade, I instantly thought it would bee heavy and it would weigh my hair down, but the opposite happened when I worked it into my thick, course, nicely towel dried hair for about a minute. It began to tack up, so I knew it was time to brush it back and take a run at a perfectly smooth, slightly glossy pomp. What I didn't expect was how perfectly hit held the streaks created by my wide-tooth brush (which has plastic teeth that are in uniform rows). The hair not only looked amazing, but I had great lift and phenemenal separation as well, with a little bit of gloss (but not too much). The control was astounding also. As the day wore on, the pomade dried but the lift and separation remained. My hair also looked much more on the "matte" end of the spectrum than the wet or "glossy" end. I had repeatedly run my fingers through my hair during the day and around dinner time, I looked in the mirror. The hair still looked stunningly good. It still retained the lift and separation. Pomade creates touchable hair that isn't tacky or goopy to the touch. It also washes out with ease - but best of all, there's the amazing smell. OMG! That fragrance of Granpa's Pipe Tobacco is a zillion times more fun that it sounds like it will be. It's borderline fascinating. I give Pomade my highest level of "YUP!" but be forwarned. Don't use too much. Do work into well towel dried hair for about a minute and do style with the right tool. (A comb will flatten hair down, tight to the scalp. A Brush like I described above will style the same way as a comb, but provide some height to the hair as it is manipulated)

Loving the Pomad, Grooming Creme, Spray Tonic and Beard Oil so much! Thank you! 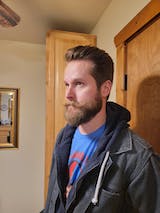 I have been using the Victory Pomade for a few months now. I have been searching for a great Pomade for a long time. I use this on men women and children. It is perfect. The coverage and texture it gives the hair is amazing. Great scent also.

Absolutely love the pomade, and so do my guys! It holds great, mutes all yellow tones and rinses out without any build-up. I’ve had to resort to repackaging for retail though because customers can’t open the tin after a few uses.

Pomade is a classic men’s grooming product made popular during the early 20th century because of its high shine and strong hold. While early versions were made from petroleum and rendered animal fats, the modern version has transitioned to more of a water-based wax that helps create smooth, easy-to-comb, classic looks in the hair, with easier removal. Victory Brand Pomade is water-based, easy to remove, simple to apply and smells like grandpa’s pipe tobacco!

When should I use pomade?

Pomade is best used to control medium to thick hair types when the desired result is a smooth, semi-wet look or a classic, easy-to-comb hairstyle. It is ideal for short to medium hair lengths.

How do I apply pomade?

For a slick look, Pomade can be applied directly to damp or towel-dried hair and combed into place.

Instead of a super stiff glued down look, Victory Brand pomade has been specially formulated to be moisturizing, to remain soft feeling in the hair, and to provide excellent control. While most pomades on the market are orange or brown in color, the Victory Brand pomades violet color is designed to help control brassy tones in blonde, silver, or naturally grey hair and keep them shining bright.

Yes.. Victory Brand Pomade is 100% water-soluble and is easy to remove with a thorough rinse.

Can I use it in fine hair?

Absolutely! Victory Brand Pomade is exceptionally lightweight compared to other pomades, which makes it a good choice for people with fine hair looking to achieve a classic, smooth look.

Does it get crunchy?

Never. Victory Brand Pomade is formulated with water-soluble lanolin that helps moisturize the hair and keeps the finish soft and touchable.

Can I mix it with the other products?

All Victory Brand products are intermixable. Want to add a little shine to Super-Dry? mix it with Pomade in your hands before you apply! Want to increase the hold? Mix it with Claymore for an amazing concoction that we lovingly called PB&J, and watch in amazement as it takes control of your unruly mop.